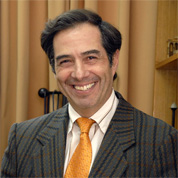 Miguel O’Ryan is Full Professor at the Microbiology and Mycology Program at the Faculty of Medicine, University of Chile.

He was Vice President for Research and Development of the University of Chile until August 2012, Director for Research and Development of the Faculty of Medicine until July 2014, and previously Director of the Microbiology and Mycology Program. Professor O’Ryan qualified at the Catholic University of Chile and studied paediatric infectious diseases at the University of Texas Health Sciences Center, Houston, Texas. He served as the President of the Chilean Infectious Disease Society from 1998–1999.

His research has focused in three main areas: a) molecular and clinical aspects of enteric disease (mainly rotavirus, norovirus and more recently Helicobacter pylori), b) new pediatric vaccines, and c) infection in the immunecompromised host. He was the principle investigator for the multinational trial of the human rotavirus vaccine (NEJM January 2006).

Professor O’Ryan's research and expert reviews and editorials have been widely published in 90 PubMed.gov indexed articles (102 Thomson Reuter Web of Science indexed articles since 1988 with an H Index of 24 as of July 2014). He has co-authored 19 book chapters on topics that include enteric viruses, parasitic diseases in children, and medications used in paediatrics.

O’Ryan was elected member of the Chilean National Academy of Medicine in 2012.